Weed And Sports: Do They Mix? 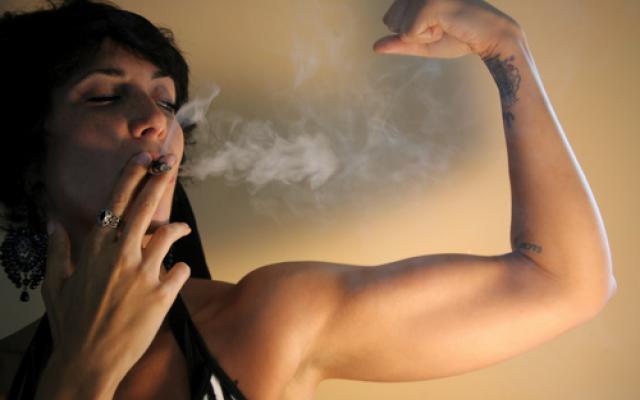 If you have ever listened to one of those anti weed son of a guns who tell you that smoking makes you fat and lazy, you will know this part already. They always tell you that if you want to be a stoner, then you have to not exercise. The way they see it, you are worthless if you smoke and chill. But there’s good news. You can play sports and still smoke weed. In fact, it may even be a good thing.

We’ve covered exercise before, but this is a little different. Weed is actually beneficial to playing sports in a number of ways. Now, does that mean that you can smoke 2 bowls of OG Kush then play a full game of soccer (or football)? Of course not. But what it does mean is that you can still have a stoner lifestyle without sacrificing your athleticism or your sports playing prowess. We’ll break it down for you.

That’s right, you know this about weed already. Smoking some loud is often a one way ticket to chillville. Weed calms your body down and relaxes your muscle functions. That means that you get relaxed and calm more quickly than you normally would. And do you know what does the opposite? Sports, of course.

That’s right, sometimes athletes need to relax before or after a competition. So what better way to do that then smoking a doobie and slipping into the sweet abyss? There is great benefit. Sometimes athletes are nervous leading up to a match. Perhaps the night before, for instance. But when they hit that green, all of those nervous impulses fall by the wayside as the gravy train of high comes and carries them away to salvation. Who would want to deny them that?

Now, here’s some more exciting news about smoking and athletics. It turns out that certain chemicals in weed can actually help stimulate muscle growth after working out. See, when you work out what basically happens is that your muscles get torn up into tiny fractures, that regrow after rest. But when you are constantly exercising, it can be hard to get them rest.

Enter bud, the cure all (not exactly, but close) to everything that ails you. CBD, one of the main active chemicals in weed has recently been show to help repair your muscles at a faster rate than normal. And when you play sports, that can make all the difference in the world.

Okay there excited Ellie, now you’re so ready to smoke a bowl and go play sports, you almost forgot to read this article to its completion. Luckily, you did, so you will learn why that isn’t always the best idea. While it can help with all sorts of things, one problem is that it does decrease certain motor functions that tend to help people play sports better.

Things like reaction time and hand eye coordination have been shown to decrease with weed use. That means that hitting that baseball just got that much harder because you packed a fat L beforehand. Some people say that they actually play better after smoking, but as a general  rule it might not be such a bad idea.

Should You Smoke Weed and Play Sports?

Now that we’ve got you all down, its time to bring you back up. So maybe its not the best idea to smoke then play your favorite sports, but that doesn’t mean you can’t do it in the times around when you play. As we’ve noted here, it might actually be a good idea. Hopefully you are in a position to do so, but hold on.

Most major sports leagues actually ban the use of marijuana, and often test for it. Why? Because they are mean people who don’t want you to feel good. In their defense, public opinion has been shifting over the past few decades, so they’re only a little slow. Certain leagues like the NBA are actually beginning to correct that problem. That being said, if you are looking to play sports professional in that capacity, well first, welcome to our site, please reach out to hang out. Second, maybe its not the best idea for you to get lit.

What Are the Best Options To Do So?

Bringing it home, we’re here to close it out. So you’re in a recreational hockey league, and you’ve decided that you want to smoke after you play to help those muscles get nice and strong. What are the best options?

First, you can try just CBD substances, which are becoming more popular every day, but do come without the high that is actually one of the more fun parts. We recommend getting a vape. Vapes don’t do the damage to your lungs that inhaling smoke can and its also an easy way to do it. Then, just purchase your bud from The Pot Vault, and you’ll be all set.

So, there you have it. You can still be an old fashioned stoner and enjoy all of the benefits of the athlete. Your muscles may actually thank you for the exercise. Watch those lungs, we recommend trying some CBD or edibles to help reduce the congestion associated with smoking bud.

Now that you’re ready to go, play a game of basketball. You could be the next Andrew Wiggins. And don’t forget to smoke some bud after. That is, of course, assuming that you are not in an organized league that frowns upon that sort of behavior. But anyway, nows as good a time as any. With spring around the corner, go enjoy the sunshine and the fun of the outdoors. So until next time, stay sporty!